Not just another ER visit… 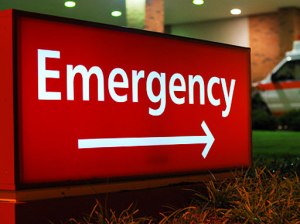 Metastatic cancer sucks.  It never comes back the same way and each new metastasis brings a new treatment, sometimes a new doctor, and a tighter grip on ones mortality.  After a scheduled MRI and a trip to the ER, we were told that my wife’s breast cancer has returned to her brain.   This isn’t new ground as we have been through the, ER, brain metastasis, craniotomy, gamma knife thing six month ago.  But this time, although devastating and scary, it was easier to take the news she was going to be receiving whole brain radiation.  There were no tears and panic.  After a couple of days of processing, I think I know why.

Typically, any trip to the ER with my wife is generally a full day affair.  We check in.  Tell three separate people her symptoms.  Explain that she has metastatic cancer, which queues them to look sad.   There is an online file associated to her hospital number, likely huge, that holds all the details of every appointment, surgical intervention, chemo session, radiation treatment, psychiatry appointment, and ER visit. Depending on the symptoms, this usually leads to an ER doctor reviewing her file.  This takes a couple hours and generally leads to a few more of tests and other specialists opinions.

Because we were already in the hospital for Anna’s MRI, we decided to pop into the ER and communicate the 10-day headache Anna had been having.  We could have waited for them to officially review the MRI, but I was worried something bad was going on.  I called Anna’s radiation oncologist and left a message with details of what we were doing and what was happening.  Then we went through the our typical experience explained above.  While we were waiting for the ER doctor to review her file and try to track down the MRI results and neurosurgeons, Anna’s radiation oncologist called me back.  She asked how much pain Anna was in and said she would come over to see her.  It was 6pm and she wasn’t at the same hospital.  While we waited for her to arrive, we both silently worried about whether or not this was bad news.  Sure enough.  It was bad news.  Although never easy, I think most oncologist are better at giving bad news cancer results than other physicians.  Especially, when they are familiar with your situation.

Her radiation oncologist, by coming to the ER, saved us at least four to five hours of waiting.  This is four to five hours of anxiety and high levels of stress.  She gave her interpretation of the results right away.  Explaining that the rest of the team has not reviewed yet, but gave her suggestion of the best treatment options.  She helped the ER and neurosurgical resident understand what was going on and got it sorted out quickly.  She was simply amazing.

Metastatic patients go through lots of treatment and learn to become very resilient in waiting for everything.  Having a plan and not prolonging waiting for bad news can make a seemingly terrible situation into a manageable one.  We shouldn’t expect perfection because our health system and the physicians that operate in it can’t give personalized treatment every time.  Time and money prevent this from occurring.  I can’t express how thankful I am for the doctors, nurses, and health care professionals that go above and beyond caring for my wife and family.